At the beginning of the year my calendar was filled with a number of historic reenactments and immersive living history events around the southeast. As the year started, I was able to attend – and photograph – reenactments in Brooksville, Florida and Aiken, South Carolina. Then, as we all know, things changed, plans were scrapped, and my calendar freed up. Along with a few hundred reenactors, I was more than eager to get out again, and that opportunity finally presented itself at the Battle of Camden.

As is my custom, I will leave the historical importance of the battle to those who know and understand history better than I do. The broad facts are that the continental forces were handed a devastating defeat that cost General Gates his command of the southern forces of the Continental Army and, essentially, ended his career.

The reenactment of the Battle of Camden, of course, was played out on a much smaller scale. Rather than thousands of troops, there were a few hundred on hand. And rather than taking place in the hours before dawn, as the original had begun, our version happened at a much more convenient time of day.

If you have attended reenactments, then you know that the battle is but one part of the day. In the morning, and again after the battle, the camps are open to guests. It is an excellent time to learn something of camp life in particular, and life in the 18th century in general. The reenactors are eager to share their knowledge, answer questions, and – happily – have their pictures taken.

I often find that my favorite images come from the camps. Photographically, it’s a much different process than what occurs alongside the battlefield. I look for favorable light, backgrounds that are not cluttered with parking lots, portable toilets or other visitors. Then I watch for gestures, expressions and interactions between the reenactors. If I’m lucky, I stumble across good colors, lines and shapes. These things – almost subconsciously – help to create better images.

Since the Battle of Camden was the first reenactment that most of these units have participated in in months, I tried to capture as many different people as I could. Not all of the images are “portfolio quality”, but I hope to be able to support this community with at least a few images that might be of some interest to the reenactors themselves. (I provide copies of the images to them without charge.)

As a result, the final gallery is fairly large. You can see it here. I’ve chosen a few of my favorites, which I have shared along with comments below. Clicking on any image will enlarge it. 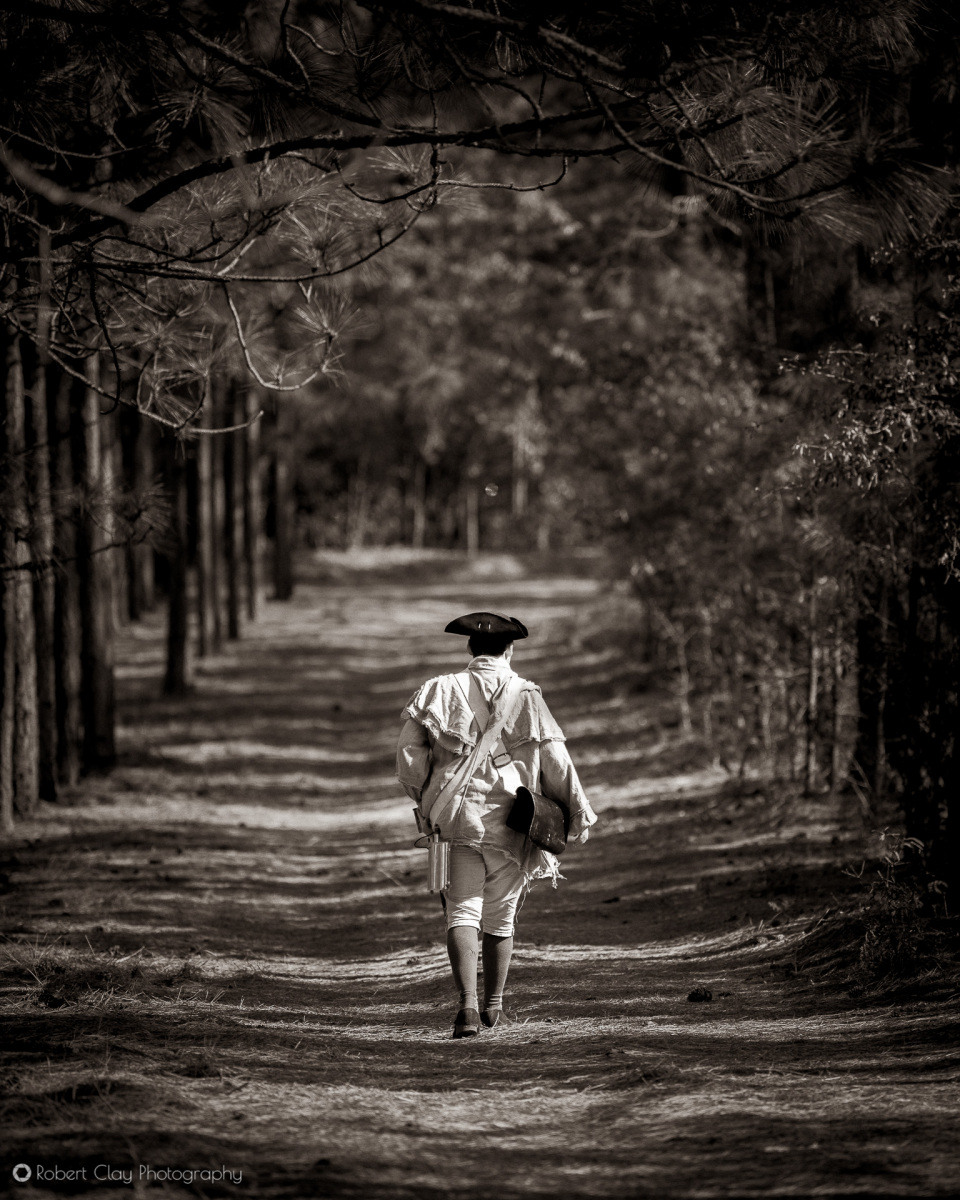 A militiaman returns to camp after a morning drill. The trees and shadows form a frame around him. Color added nothing to the image, so I chose to process it in a muted sepia tone.

So that was what I saw at the Battle of Camden this year. (You can see what I saw last year here.) If you were there, I would love to hear about what you saw. And if you have any questions or comments, fell free to post them below.

All images are copyrighted and owned by Robert Clay Photography. No images are to be copied or downloaded from this site. Limited licenses are available (sometimes without charge). Any usage without express permission and the appropriate license represents a breach of US copyright law.